After nearly 25 years in the planning, Te Awamutu’s new $4.4 million library has opened.

The new 1400-square-metre building has a space for every book, Gross said, plus space for DVDs, newspapers, magazines and heaps of other stuff.

Waipa District Mayor Jim Mylchreest said the development is a fantastic step forward for the community.

He said around 65 percent of Waipa residents belong to the library and it remains the district’s most popular facility.

A collaborative project between Beca and Waipa District Council, this strategic improvement is the vibrant joining feature between the laneway, the existing events centre, library complex and open green space of Selwyn Park.

The streetscape utilises white terrazo pavers symbolic of the streams movements, by changing the pattern and frequency it carefully depicts the movement from one building to another along the streetscape. The cinnamon colour pebble in the concrete and banding of grey rough pavers represents the Mangapiko stream geology, encapsulating the sediment, flow and feel of the stream.

See some of the completed Images:- 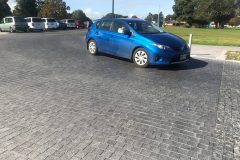 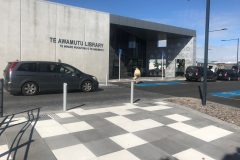 More information on the project can be seen on the NZILA page at https://nzila.co.nz/showcase/selwyn-lane-streetscape